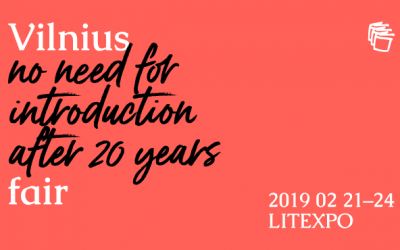 The international Vilnius Book Fair celebrated its 20th anniversary. Held on February 21-24, 2019, with the slogan “20 years after” the Fair invited the exhibitors, guests and visitors to celebrate and evaluate the changes that happened in the life of literature, and to discuss what will come next.

Since its start in the year of 2000, the International Vilnius Book Fair is the biggest and most important book fair in the Baltic states. It gives a possibility to evaluate the whole publishing market of Lithuania and the neighbouring countries. At the same time it has become the well-known cultural event in Lithuania and the main annual meeting place of publishers, authors and readers that attracts more than 60.000 visitors. The Fair is visited by the stars of the literary and culture from all over the world.

Vilnius Book Fair welcomed 360 exhibitors from 8 countries,  54 foreign guests from 21 country of the world, and 68.430 visitors. There were held 546 cultural events.

What is special in the Vilnius Book Fair?

Children‘s Book Hall – all the novelties of children literature presented by Lithuanian and foreign publishers, as well as the space, where children can play freely and meet their famous book characters on the stage.

Creative studio invites visitors of the Fair to take part in the creative workshops, readings, meetings with authors of children’s literature, book illustrators from Lithuania and foreign countries. Creative studio is a part of Children’s Book Hall and is initiated and organized by the famous Lithuanian artist Sigutė Chlebinskaitė.


Library open. Friendly and modern library created by the Lithuanian Librarians Association. One more space devoted to reading and networking.

The Bouquiniste Passage. A different area for those visitors who adore reading and collecting second-hand books or listen to the vinyl plates.

The Book Cinema Hall. The screenings of the latest movies made after well-known novels, and documentary films about writers, poets and artists.

We advise on all issues related to the organization of new events, ticket purchase, etc.

Get the news first

Get information about the latest events, exhibitions and other news

We use cookies to ensure that we give you the best experience on our website. If you continue to use this site we will assume that you are happy with it.OkPrivacy policy